Just in case anyone gets the wrong idea,  this travel complaint isn’t genuine.

The Travel Agency doesn’t actually exist (at least we hope not!).  The letter was written especially for Dear Customer Relations by wordsmith Nigel Johnson-Hill – who also wrote the brilliant letter to the Secretary of State for the Environment about the ‘Not Rearing Pigs Business’ (see Best Ever Silly Letters).

I wish to make a complaint.

You may recall that I booked a Christmas holiday to Bethlehem last week for my wife and myself through your company.

The travel arrangements were fine. You were right to steer us away from the camel train – they seem to be best known for their poor punctuality – and the donkey seemed a good substitute.

My complaint is about the hotel accommodation – frankly, it was an utter shambles. The Inn at Bethlehem, which you had assured us had a wonderful reputation, let us down badly. Not only did they have no record of our reservation, but they went on to inform us that there were no hotel rooms available – apparently they had all been taken by people attending a tax conference. They then had the gall to offer us accommodation at the rear of the hotel – in a stable!

On seeing the stable I saw red and demanded to see the hotel manager, who coolly produced the hotel’s brochure – the same as the one you showed us – and, pointing to the small-print on the back, said: “Sir, it clearly states here that some of the accommodation may be in the annex”. You can imagine my reaction. Annex? This was a stable with a load of animals in it! Alas we had no option but to accept, as my wife – you may remember she was heavily pregnant – chose this moment to go into labour.

The hotel manager tried, and failed, to locate a midwife, but happily my wife was able to deliver her own child which she laid in a manger. My mood at this point was not improved by the realisation that the child – a baby boy – did not seem to look remotely like me, God knows why not. But at least the mother and child were healthy, so healthy in fact that they both seemed to have a glow about them.

My thoughts were interrupted by the arrival of three rather rough types, sheep farmers apparently, who came to the stable claiming they were tired of abiding in the field, and could they take a look at the baby? As if that wasn’t bad enough, there then arrived three well-dressed types, intelligent men, or so I thought, until they produced the daftest presents for the baby you could imagine – gold, some frankincense, even myrrh – I ask you! No toys, no baby grows – so impractical.

At this point all hell broke loose. Sweeping into the stable a whole host of angels arrived, playing trumpets and singing Hallelujah! The baby woke up and started crying. All these uninvited guests – the sheep farmers, the three allegedly intelligent men and the host of angels (you can imagine how crowded the stable was) – kicked up the most infernal din, and there was no hope of getting any sleep that night.

You will, by now, be aware that I am thoroughly dissatisfied with Galilee Travel and the holiday arrangements you made for us, and I demand a refund.

If you haven’t read Nigel’s letter to the Secretary of State at the Department of Food and Rural Affairs about the ‘Not Rearing Pigs’ business, you really must.

It’s one of the best silly letters ever written. Click here. 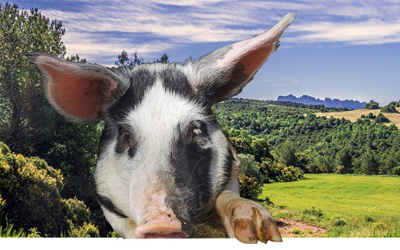 Let DCR know what you think about this post Cancel reply

This site uses Akismet to reduce spam. Learn how your comment data is processed.

Apologies if some of the funny complaint letters still look a bit odd. We've nearly finished the re-build and will soon have every letter looking very smart again.

DCR's new sister site is now live. Do you know the difference between Boondocks and Boondoggles? Do you sit on your Butt or collect rainwater in it? HERE, you can get an explanation of uniquely British and American English words and avoid the many linguistic tripwires involved in crossing the pond.

DCR in the Media